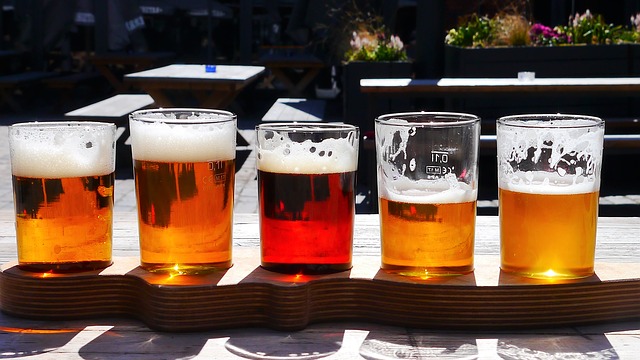 The din of Tuesday Trivia Night filled the Nashville brewery, as patrons clustered at tables puzzled out answers to questions posed by a woman on stage.

“What river separates Texas and Mexico?” the dark-haired emcee asked the people scattered around the taproom. A hush fell as the groups jotted down their replies.

Across the room, Todd Hood — owner of the Bold Patriot Brewing Co. and happily transplanted ex-Californian — sipped his coconut porter, his back facing the flintlock pistols that decorate the bar’s door handles and the walls painted with American Revolution-themed murals of Benjamin Franklin and the Declaration of Independence.

The bar’s Patriotic Taproom was birthed in 2012 in an 800-square-foot brewery in Riverside County. But it reopened in Nashville in 2020, after Hood and his partners decided against expanding in California. The state isn’t business friendly, Hood said, so the group went in search of a place that they saw as more welcoming.

“We wanted to go to a state where we can actually live and have a cost of living that someone young like myself could start a life,” Hood, 31, said.

For years, Californians have flocked to states like Texas, Arizona and Nevada, some seeking politically redder pastures while others move simply because they can’t afford the West Coast’s skyrocketing housing prices. But less recognized is the growing number of people leaving for the Southeast in general, and Middle Tennessee in particular.

The migratory shift coincides with multinational businesses once headquartered in the Golden State relocating their U.S. headquarters to the Nashville area or opening large offices there. Nearly 12,000 people left California for Tennessee in 2019, according to U.S. Census Bureau data, up from roughly 9,600 in 2018 and about 7,900 in 2017.

The pandemic has accelerated that trend, as Californians pack up and head east to Nashville and nearby Franklin in search of opportunity in the bustling country music scene, or the city’s booming healthcare, tech and other industries. Transplants from Los Angeles, San Francisco and other parts of the state say they’ve discovered a place that incorporates their favorite parts of big-city life on a smaller scale.

Affordability is a key motive for many on the move, but it’s Nashville’s amenities — a wealth of museums, a rich cultural history, prominent universities, the constant flow of live music and the sense of Southern hospitality — mixed with economic factors like lower taxes that serve as the siren call luring newcomers.

“We all love California in the sense that it’s beautiful. You have the mountains, you’ve got the beaches,” Hood said. “But there’s other things that I can do here. It’s hunting, fishing, hiking. All kinds of stuff. There’s lakes and rivers everywhere. I mean, when you drive outside of Nashville, it takes you 15 minutes to …….